This week's Heavenly Cake Baker cake was the Swedish Pear and Almond Cream Cake on page 58 of Rose's Heavenly Cakes. I am not much on a fan of cakes with fruit in them and I hate marzipan - which I assumed was the same as almond paste although, after a bit more research I discovered it isn't - so I wasn't holding out much hope for this cake. But, of course, I shouldn't have doubted Rose.

I skipped adding any almond paste or almond flavoring and decided to include the pear as instructed and while the cake part of the cake was delicious with a very tender crumb, the overall was kind of a crap shoot.

The cake did not brown well in my bundt pan (it very well could be the pan, as it's pretty lightweight) and the top part, where the pears were, completely stuck to the pan...so the presentation was pretty sad. I'm not sure if it was a lack of the almond flavor giving it some depth, but I also found that the pears were pretty tasteless. The cake itself though was very nice. It was light and airy in texture with a simple, straightforward flavor.

In one of my baking classes a few months back we made a frangipane pear tart using canned pears and I remember thinking at the time that the pears were really mushy and bland but that I thought it would be delicious with fresh pears...Well, now I think that's not the case since the fresh pears in this cake were also really mushy and bland. Maybe my pear was overripe? Not sure, but if I do make this cake again I'd probably just leave out the fruit all together. 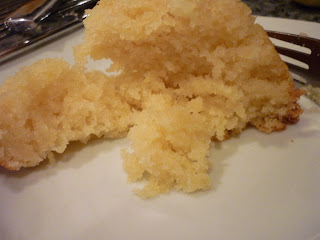 
Posted by inthekitchen at 9:25 AM