It's week five of my bake-through adventure with Rose's Alpha Bakers. Up this week is the Frozen Pecan Tart - which I served for dessert after Christmas lunch - from Rose Levy Beranbaum's The Baking Bible. The tart was a huge hit and was met with a chorus of ohhs and ahhs and a round of "you made this? It's delicious! Seconds, please."


I let the tart warm for about 30 minutes before serving because it seemed rock solid when I took it out of freezer and I was a little unsure how a frozen tart/pie would taste (was it really not frozen through? It felt pretty solid!). But - never doubt Rose! - the filling was smooth and silky, almost like caramel. Even after 30 minutes, the tart was quite chilled - which was different than what I'm used to with pecan pie (warmed with vanilla ice cream, please) - but it was very, very good.

I added some leaf cutouts on surface of the tart (using these small leaf cookie cutters I bought at Amazon.com) and - other than wishing I had baked them slightly before adding to the tart so they would be a bit more brown - I really liked the decorative addition.

Here are my step-by-step photos.


The crust was a pâte sucrée, so it's made with more sugar than a regular pie crust and has an egg yolk added to strengthen it. Pâte sucrée is a great crust for tarts because it's very sturdy and easy to roll out. I love making pies and tarts!


At this point, the recipe directions got very complicated about how to roll out the dough and lift it into the pan. It involved a pizza wheel, a 12" flan ring, and inverting the dough over the back of an 8" cake pan.

Hmmm...I normally just roll the dough larger than the tart pan and the gently work the dough onto the bottom, corners and up the sides. As much as I know that Rose never steers me wrong, I'm going to just to this my way. The main thing to remember is to not stretch the dough as you place it in the pan, otherwise it will pull back and shrink when it bakes. 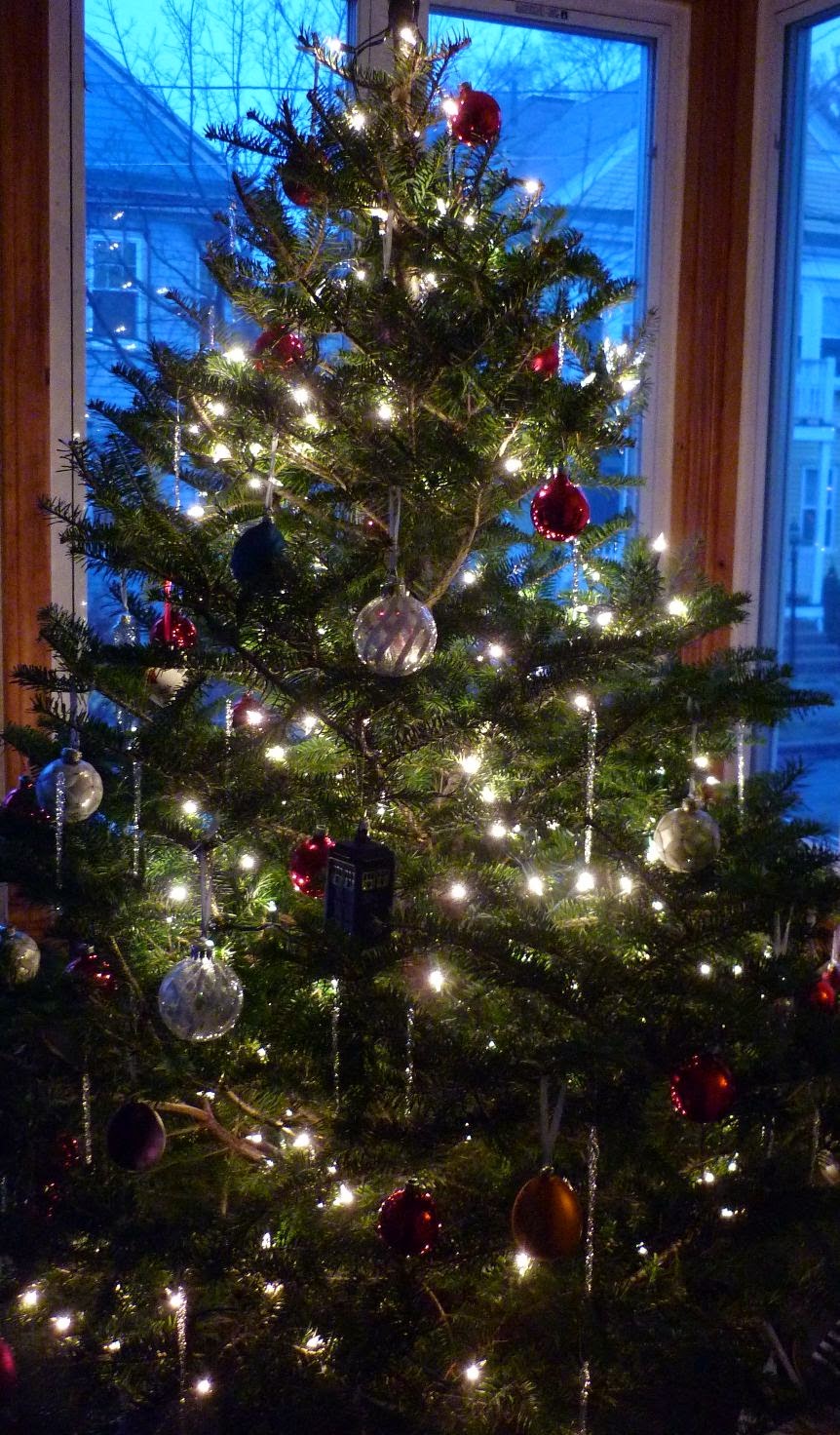 Bye for now...
Posted by inthekitchen at 7:08 PM No comments:

I enjoyed them so much that I decided to make the recipe again to give to my family on Christmas. However, this time I used some cocoa powder instead of espresso powder since some family members dislike coffee. Ta da...here are my Almond Chocolate Crisps. They are very similar to the Coffee Crisps...except chocolatey, as you'd expect :)  I highly recommend this (and the original) recipe. It's very quick to make and the cookies are delicious!

I only took a few photos from yesterday's Almond Chocolate Crisps, but you can see the step-by-step photos of the original Almond Coffee Crisps here.

I have been in love with canelés for several years now. My husband and I have visited Montréal almost annually for the past 5 years. A few years back we discovered a cute little café/boulangerie/pâtisserie called Mamie Clafoutis on Rue St. Denis. It was at Mamie Clafoutis that I first discovered the canelé (formally called Canelés de Bordeaux and sometimes spelled cannelés)...and a love affair was born. I don't know how the Mamie Clafoutis canelé compares to one you would find in France, but I loved them!


The canelé is crunchy, chewy, and caramelized on the outside and custardy and creamy in the inside. It's pure deliciousness. I mean, look at this picture -


After having them several times in Montreal, I was determined to make these at home! I read through several online recipes and decided to try Chez Pim's on my first go 'round. I liked that her website had lots of photos and that she included detailed directions on the method. I can be a bit obsessive so I like details, details, and more details when I haven't made something before. Paula Wolfert also has recipe online and a history of Canelés de Bordeaux. The one area where I differed from both Chez Pim and Paula Wolfert is that I haven't (yet) used beeswax to coat the molds. I also use silicone molds - I have the de Buyer brand - which I love.

Again, I don't know how close my canelé are to those you would find in Bordeaux (without the copper mold and beeswax), but, to me, they are perfection. For me, many of the pictures of those made with the beeswax are too brown, uniform, and waxy looking. If you only have the silicone molds and have been debating whether to try these, please do...you won't be disappointed! I have made them several more times since I originally drafted this post..and each time, perfection!

I got this amazing cookbook last Christmas, Fine French Desserts: Essential Recipes and Techniques, and look forward to trying their canelé recipe. It is quite different from the recipe below so I'll be curious to see how it turns out. Maybe I should have a canelé taste-testing party!

This recipe makes approx. 16 canelé. The batter should be made 24-48 hours before you plan to bake them. Personally, I prefer the way mine bake up and taste after 24 hours rather than 48 hours of resting, so I usually make the batter just one day in advance. (Although, I only bake them as I'm going to eat them, so some batter gets used 48+ hours later. You can experiment and see what you like best!)

Step 1: in a medium saucepan, combine the milk, vanilla bean pod and seeds, and butter. Bring to a boil, stirring occasionally to ensure the butter melts and the vanilla seeds are distributed throughout (per Chez Pim, you want the mixture to reach 183 degrees F).

Set aside and let cool slightly while you prepare the remaining ingredients.

Step 2: while the milk mixture is cooling slightly, prepare the other ingredients. Over a large bowl, sift together the flour, powdered sugar, and salt. Set aside.


In a medium bowl, gently combine the eggs and egg yolks - try to avoid getting any air into them! Pass the eggs through the same mesh strainer, directly into the flour mixture. Use the back of a silicone spatula to press the eggs through...be patient, it will take a while to get all the eggs to go though the strainer.


Then, very gently so as not to incorporate any air, mix the eggs into the dry ingredients.


Keep mixing, gently, until all of the ingredients are incorporated. It will be a lumpy, sticky, doughy mess at this point.


When the milk mixture cools down to about 120 degrees F, remove the vanilla bean and place it in a heat-proof glass food storage container (e.g. pyrex) and set the dish aside. Carefully pour the milk mixture into the bowl with the flour-egg mixture.

Gently (again, you don't want to incorporate any air into the mixture) stir with the spatula until the ingredients are well combined (there will still be lumps at this point).

The last step is to gently stir in the rum.


Cover with plastic wrap and then the container's lid. Refrigerate.


Step 3: about 30 minutes before you're ready to bake, preheat the oven to 475 degrees. Prepare the molds by brushing the inside of each cavity with melted butter. You want a good coat, but don't want too much butter to pool in the bottom indents of the mold. Because it's silicone, the butter won't stick too well to the sides, but the canelé will come out fine (and you can even leave the molds unbuttered - see below for my butter/no butter comparison).

Refrigerate the molds for at least 10 minutes or so (so the butter and silicone are chilled).


Step 4: after the batter has been refrigerated for 24-48 hours (and your molds are buttered and chilled), you're ready to bake! Give the batter a very thorough, gentle mixing (it will settle overnight and will be very thick on the bottom) to make sure the consistency is even throughout.

Place the mold on a sheet pan covered with parchment then use a 1/4 measuring cup to fill the molds. You'll have to experiment with how full to fill your molds. 1/4 c. was perfect for my oven - no puffing over the top but full enough to make a nice, tall canelé.

Step 5: the baking! Here's where things need a bit of micromanaging. Also note that these times worked for my oven, you'll need to see what works best for your oven but you can use these guidelines.

As soon as you put the pan in the oven, lower the temperature to 450 degrees
Bake for 7 minutes, rotate pan from front to back
Bake for another 8 minutes (total of 15 minutes at 450 degrees)

At this point I took mine out and flipped them onto a cooling rack. they were way too light so I quickly popped them back in the mold and back in the oven for 20 more minutes (this would be a total of 1 hour 20 minutes at this point). In checking Paula Wolfert's recipe, she bakes hers at a higher temp (400) for nearly 2 hours, so I'm not worried about over-baking, but rather am looking for the dark golden color. Luckily the custardy centers weren't overdone.

Finally done! To unmold, place a wire cooling rack over the top of the molds then flip them over. Beware that hot, melted butter will drip out from the mold. It helps to place some paper towels under the cooling rack before you flip. Don't burn yourself!

I didn't get any of the puffing up effect that Chez Pim talked about - I was super careful to mix gently, with a spatula (say no to whisks for this recipe) - and my batter did not raise up above the molds at all.

Now...to butter or not butter? That is the question!

If you're using the silicone molds, you don't actually need to butter the mold cavities. However, I found that I liked the results with the buttered molds better. The canelé from the buttered molds were shinier, crunchier, and more caramelized than the unbuttered ones.

Overall, I prefer the silicone molds, buttered. I don't like the completely uniform, dark crusts of the copper molds with beeswax. I like a less uniform look to my canelé. Chez Pim's are pretty uniformly brown, but I prefer some golden brown ridges with lighter golden brown on the top and in the crevices.

Here are some photos of canelé made in buttered vs. unbuttered molds.