I love chocolate chip cookies. And, of course, they are best right out of the oven with the gooey middles still warm and melty...pure delight! I generally use the Toll House Cookie recipe since I know it by heart but I prefer to use better quality chocolate chips and I usually add some nutmeg.

Although I didn't add nuts to this batch, I also like to process the cup of nuts to a fine grind (instead of chopping them) because it gives the cookies a really nice texture and the hint of nutty flavor. And, finally, since chocolate chip cookies are best fresh from the oven, I will never bake up the full batch, but rather just set the unbaked cookies on a sheet pan and them freeze them. Once they are frozen I store them in a freezer bag and just bake up a few whenever I need a little chocolate fix.

Posted by inthekitchen at 4:30 PM No comments:

I've found it to be really difficult to find something interesting to photograph every day so over the past few weeks I've been taking pictures of things that interest me when I see them and will use those photos to fill in the gaps for days when I didn't see anything that caught my eye. I am also planning to give myself a theme for each month which will lessen my guilt over taking 5 pictures of tree branches in a row ;)  About half way into the month I decided that the unofficial theme for the rest of February would be trees, tree branches, things in trees, cute seed pods, etc.

So, my goal is still to take a new photo every day but I'm not going to stress about it anymore...after all, this is meant to be a fun project, right? Right!

Bye for now...
Posted by inthekitchen at 2:49 PM No comments:

A Light Supper: Insalata Caprese and a Mushroom, Onion and Goat Cheese Tart

During my Christmas Cookie Decorating party I served a light supper of a delicious Insalata Caprese and a Mushroom, Onion and Goat Cheese Tart. I wanted something light but tasty to help everyone try to avoid a complete and utter sugar overload.

I got the tart recipe from Martha Stewart and added some thyme to add a little bit of flavor. It was delicious! It was very easy to make and was something that you could do several hours or even a day in advance (make the filling ahead and then assemble and bake the day of).

The Caprese salad was also incredible and the presentation is so pretty. The combination of flavors with the fresh mozzarella, basil and tomato just can't be beat. Add some crusty bread, red wine and that's my idea of a perfect meal. Yum! 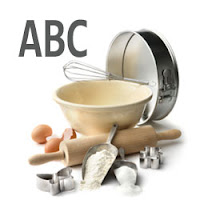 This month's Avid Baker's Challenge club are the delicious Glazed Cinnamon Rolls on page 334 of The Weekend Baker by Abby Dodge.
Last May, the ABCers made Overnight Cinnamon Buns and I was curious to see how these compared to those wonderfully light and tasty buns.

Overall, each recipe had pros and cons so if I make cinnamon buns again I will try to do a combination of the two and (hopefully!) wind up with THE perfect cinnamon bun.

So, what did I like about these Glazed Cinnamon Rolls? The pros for me were: they were quick and easy to make and the finished dough was so well behaved and easy to roll out. It was soft and manageable and rolled out without even needing any extra flour. I rolled it out between pieces of wax paper, but I don't think I even needed to do that. [My biggest con for the Overnight Cinnamon Buns is that the dough was very sticky and hard to roll out (although I made them in May vs January so the weather may have played a big part there).] The flavor of the cinnamon filling was also quite nice and didn't get absorbed into the dough, which I like.

The cons were that I thought the dough itself was a little bland vs the other cinnamon rolls, which contained orange zest. I did add some nuts to try to create a sort of a nutty-caramelized topping (in the bottom of the pan) and had mixed results with that...disappointing. I was going for something similar to Baking with Julia's Pecan Sticky Buns, but most of my cookbooks are in storage so I just guessed at the ingredients for that and was so way off in terms of how much butter to put in the pan that it's not surprising mine didn't caramelize. Julia's recipe calls for 1 STICK of butter (O.M.G.) to be spread into a 9" pan...I only used about one tablespoon in a 6" pan. So, obviously, mine did not caramelize like the dreamy pictures in Baking with Julia. As much as I love butter, that is a lot of butter! Although...in the big picture, I guess it's only about 1 T per serving so maybe I can convince myself to go through with Julia's method someday!

Anyway, back to these Glazed Cinnamon Rolls. Next time I will add some lemon or orange zest to the dough to jazz it up a bit and also add some nuts to the filling. Here are my pictures.